Full Visitor News
A groundbreaking was held Friday, June 25, for $10 million project of North Central West Virginia Airport. Gov. Jim Justice joined airport, state and local officials to launch the first phase of the addition of a new airport terminal and Aerotech Business Park.
“This project has all the earmarks of something that is going to be incredible to West Virginia,” said Justice, who has supported it since he was first approached about several years ago.
The first phase of the project will involve $10.5 million in earth-moving work by Wolfe’s Excavating, who was the winning bidder announced on May 20 of 2020. The initial phase is funded from a $10 million grant the governor awarded the airport. The rest is being covered by funds from the airport, as well as the Harrison and Marion County Commissions, the joint owners of the facility.
Two additional phases will take place will include the concrete work needed for the airport aprons, the lighting and other airport essentials that the Airport Authority is hopeful will receive FAA funding. The final phase is the construction of the terminal. The parking area, which along with the terminal will be designed for expansion, will also be part of the final phase. 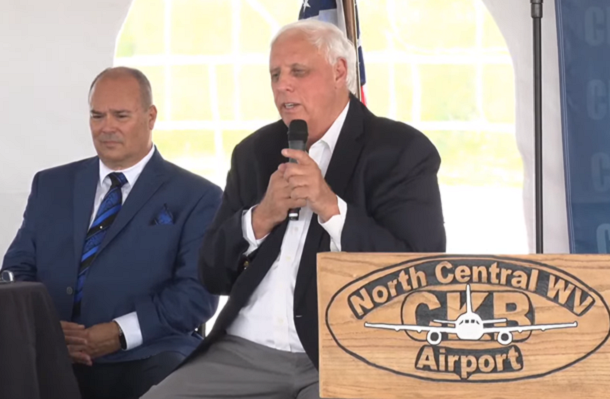 When the excavation work is complete, there should be nearly 100 flat and contiguous acres next to the runway. The terminal site will take up 18 of those acres with the rest for the business park. The project will total many more millions above the $10.5 that will handle the moving of 3 million cubic yards of dirt.
Although a definitive final price tag is not known, Justice hinted at it. He said more than once that it will be a $20 million investment.
The end game is not only to provide a better service for the flying public with a new terminal, but to create jobs with the business park on the flat land created from the excavation. Senator Mike Romano, D-Harrison, who sits on the Benedum Airport Authority (the airport’s governing body), talked about the project being talked about for decades and what it means when completed.
“Name me a place in West Virginia where you can have 1,000 new jobs in the next 3 to 5 years? That’s not on a wish list. That’s happening,” said Romano.
NCWV Airport Deputy Director Shawn Long said when he started in 2013, Airport Director Rick Rock pointed to the mountain that will be
excavated and said land was needed for a new terminal and for development. He told Long what had to happen.
“To get that land, we need to move that mountain,” Long said Rock told him on his first day on the job.
The mountain was still in place when Bridgeport Mayor Andy Lang, also an Authority member, arrived as the City Council representative on the board in 2017. He said that was emphasized continually.
“How do we get that mountain moved out of there? That’s what we need,” said Lang when talking about a special projects committee put together to address specific projects such as moving the mountain.
Now, many years later, the mountain will be moved.
After officials made comments and just prior to the ceremonial groundbreaking, airport officials awarded two of those attending the public event free airline tickets. Each winner, who were not identified, one four round trip tickets for any destination flight by Allegiant out of Bridgeport.
Editor’s Note: Top photo shows Gov. Jim Justice, fourth from left, tossing dirt as part of the groundbreaking ceremony, while the second photo shows Justice speaking to the crowd as Harrison County Commissioner and Benedum Airport Authority Vice President David Hinkle looks on. Gr