The Sweet Story of Candy Unlimited

The Sweet Story of Candy Unlimited

Full Visitor News
There’s no one happier than a kid in a candy store.
Bobby Anderson can vouch for that.
Anderson and her husband Gary are the owners of Candy Unlimited at Meadowbrook Mall. For nearly 14 years, they have been satisfying locals’ cravings for malt balls, gummy bears, chocolate-covered coffee beans, Jelly Belly candies and a variety of other sweet treats.
“It is fun. It’s not like owning a stressful business. It’s a fun place to be and everyone is happy when they come in here,” Anderson said.
By the pound – or by the piece – customers can purchase their personal favorites. It’s one of the few stores where a kid can shop with a dollar and get change back. 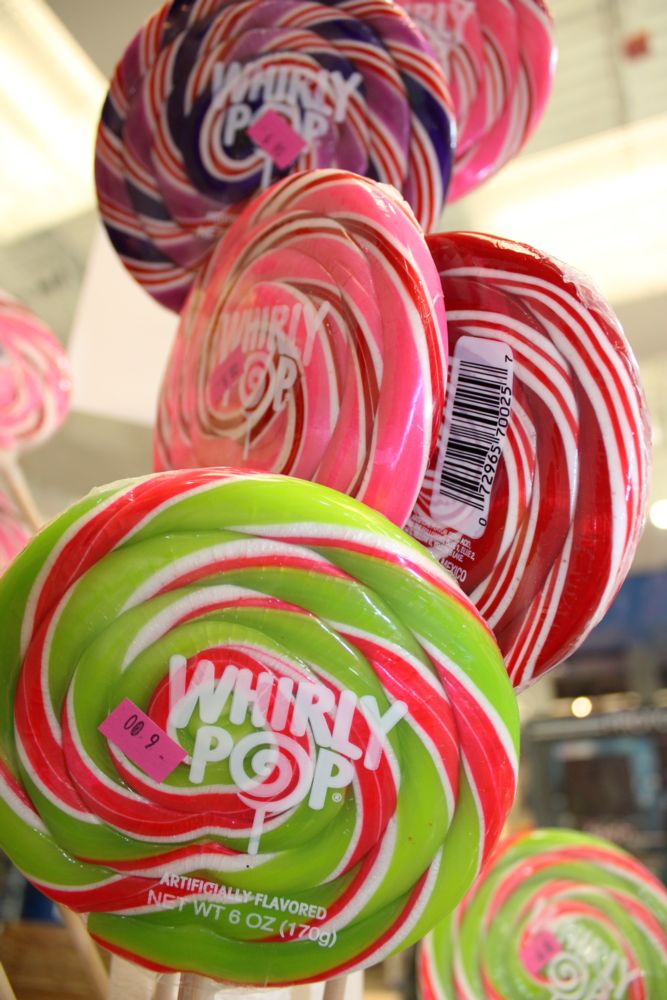 “Kids can bring in a quarter and get three pieces of candy,” Anderson said. “I think our least expensive candy is 3 cents.”
Showcase chocolates are sold by weight, as are a variety of other candies in the store. Anderson said she helps the kids keep an eye on proposed purchases, encouraging kids to weigh as they shop, so they won’t be disappointed that they’ve selected more than the money in their pockets will pay for.
Nostalgic candies like Waco Wafers, Charleston Chews, Root Beer Barrels, clove candy, safety pops, Smarty suckers, cinnamon bear suckers are priced per piece and are always quite popular, Anderson said.
“People love to go down memory lane as they’re picking out their candy,” she said. “It’s just really nice to sit back and listen to their conversations.”
Then, there are the trends.
“The big thing right now is Jelly Fruits. They are only $1 each and we sell 500 to 1,000 of them every week,” Anderson said.
Sour and spicy candies are also a hit these days. 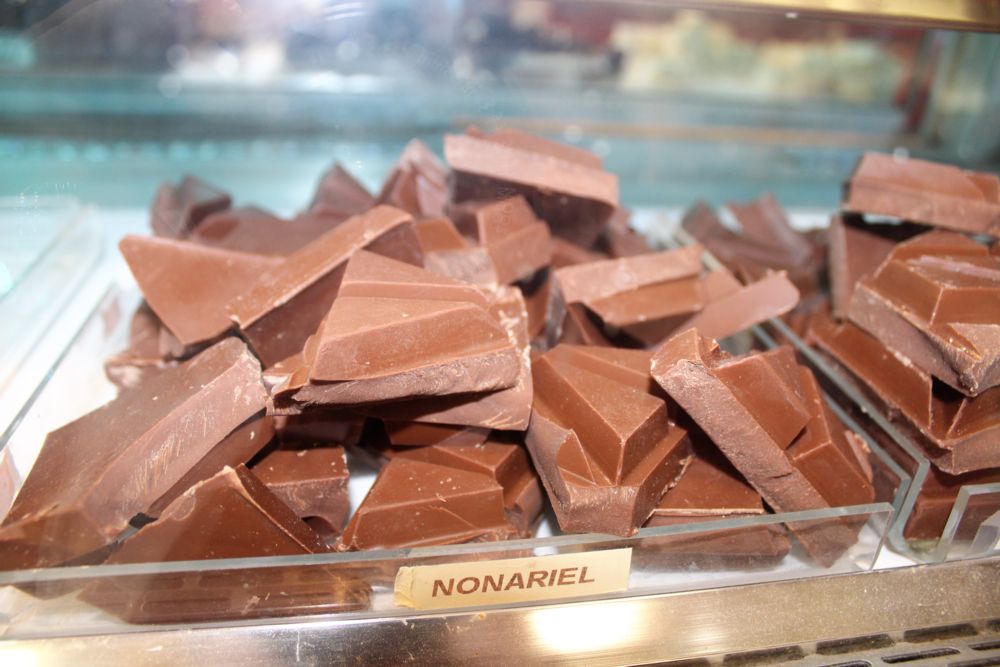 “We just got ghost pepper gummies, shaped like a jalapeno pepper,” she said. “They are labeled, ‘eat at your own risk.’”
Five years or so ago, the trend was Jelly Belly BeanBoozled flavors like spoiled milk, canned dog food, rotten egg and toothpaste, among others.
“They were a big hit when they first came out. We probably sold 50 to 100 boxes a week, but now it’s dwindled down,” Anderson said.
Yet, Jelly Belly candies – in more traditional flavors – continue to be the store’s biggest seller.

In addition to its  non-edible items such as TY Beanie Babies, Candy Unlimited also sells chocolate-covered cherries and Oreos, S’mores, gourmet chocolate pretzels, Bavarian nuts, almonds, pecans, cashews, cotton candy, rock candy and saltwater taffy.
The latter product is a blast to the store’s own past.
“We used to be located in Hilton Head,” Anderson said. “We sold a lot of fudge on the island. We were one of the only candy stores. We also sold a lot of souvenirs – sweatshirts, etc. We sold saltwater taffy in gift boxes, marshmallows dipped in chocolate and items like that.” 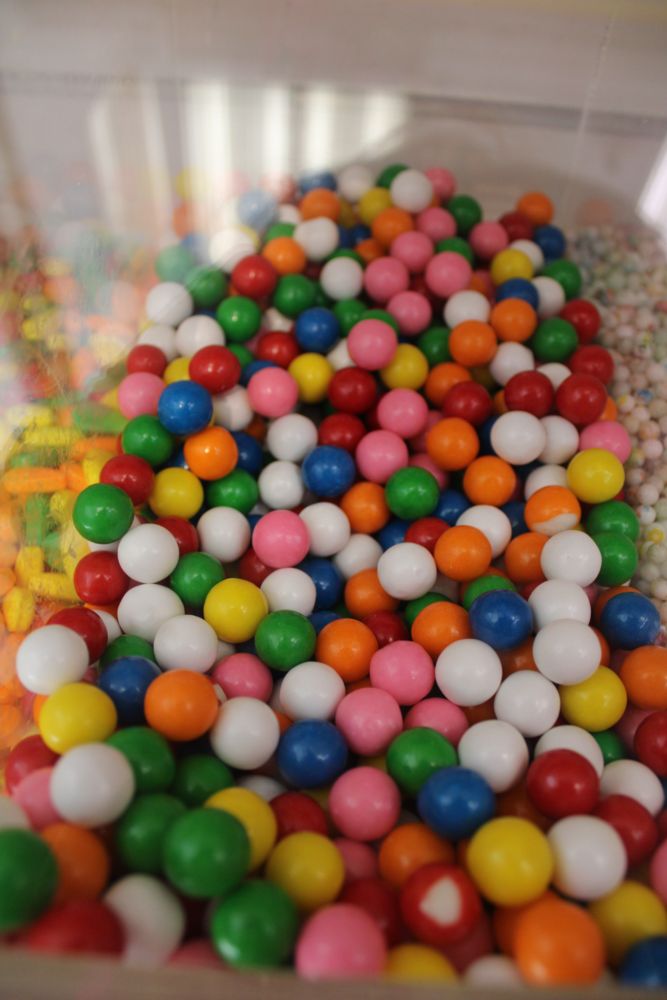 The Andersons had purchased Candy Unlimited from an individual who was on Gary Anderson’s UPS route. Bobby had worked at a cardiology office and when the doctors who owned the practice were relocating, her husband suggested she think about buying the candy shop as the previous owner was retiring.
It was completely out of her realm of expertise, but she decided to give it a try. After running the business in Hilton Head for nearly a decade, the family decided to move to West Virginia to be close to family.
“I contacted the mall to see if they had a space available and if there was already a candy store there,” Anderson said. “There was not a candy store and they had the perfect space right there at the entry.”
It was much smaller than the 3,000-square-foot store they had in Hilton Head, but as they planned to carry less inventory, it was just the right size.
The Andersons still have the news article framed in their living room. It shows their grand opening, the first dollar they made and their toddler daughter Lexi, who now works part-time at the candy store. Their 9-year-old son Jace may follow suit someday.
It’s been quite an adventure and a rewarding one, the Andersons said. They also own and operate the Cell Phone Accessory store at Meadowbrook Mall.
Candy Unlimited is located near the Food Court, just across from Chick-fil-A. It is open 10 a.m. through 9 p.m. daily. Proper precautions and methods are in place due to the COVID-19 pandemic. 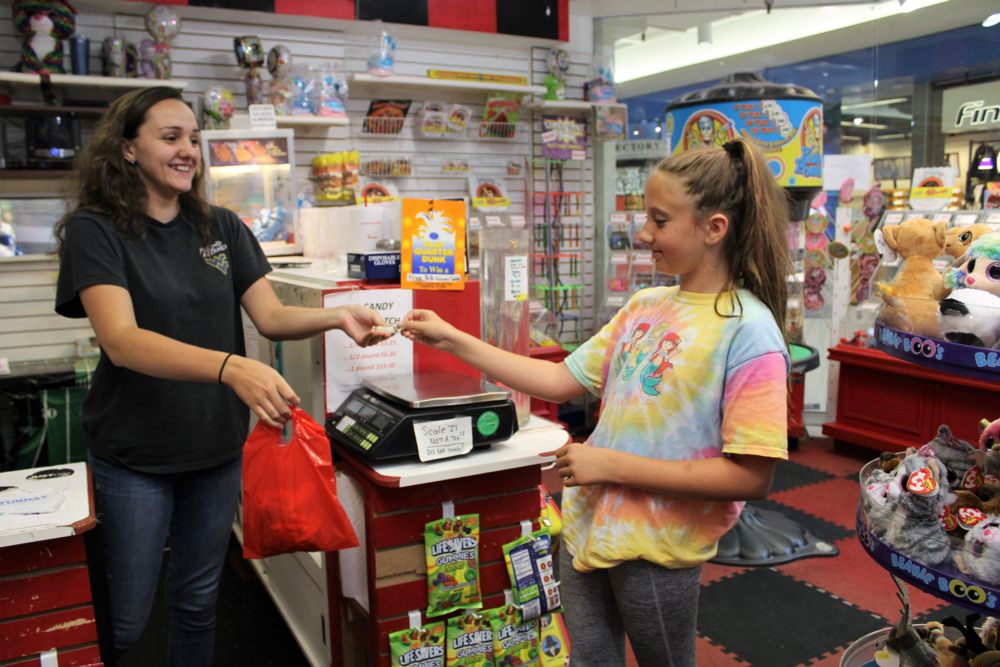