The Pumpkin Farm at Saltwell to Open Saturday

The Pumpkin Farm at Saltwell to Open Saturday

Full Visitor News
While you were enjoying the summer season, the gardens at The Pumpkin Farm at Saltwell were growing. Owner Patrick Ash has begun harvesting and the farm’s pyramid display has been loaded with pumpkins.
Opening day is Saturday, Sept. 17 and besides purchasing pumpkins, visitors to the farm can browse food trucks and craft vendors, adding more autumn atmosphere to the occasion.
“We’ll have Maple Valley Meat Market with pulled pork barbecue sandwiches and sides, including loaded mac ‘n cheese. We’ll also have kettle corn, and crafters with homemade products,” Ash said. 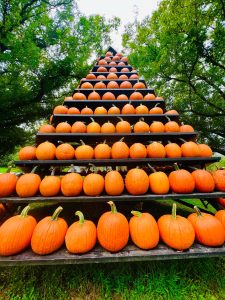 Corn stalks, mums, and a plethora of pumpkins will be the main attraction.
“We have gourds, jack be littles, jumbo stem and jumbo pumpkins, gourdy goblins, the blaze, white pumpkins, and pink pumpkins, and our artist is already working on some painted pumpkins,” Ash said.
It’s been a tough year for the Ash family, both personally and with the farm. Ash’s mom passed away in early-March. She had been involved with the farm since Ash’s dad first opened it in the 1980s and she remained active through last season.
Despite the sunshine and rainfall, the crop itself didn’t do as well as in recent previous years. 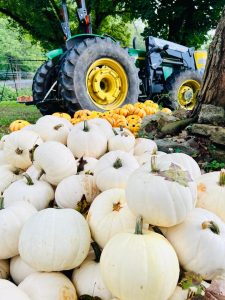 “The bottom didn’t grow much more than weeds this year, so the front yard won’t be filled with the really large pumpkins. That’s where we grew them,” Ash said.  “It’s unfortunate, but it happens.”
He said he is fortunate, though, to have friends and neighbors who stepped up and grew some pumpkins for backup. 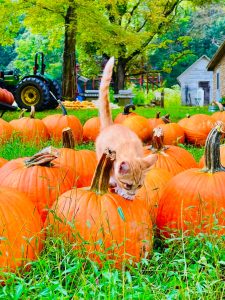 “So, we do have some pumpkins we could pick and harvest and some friends who stepped up and grew some locally,” Ash said.
In addition to those already set up, there will be many more pumpkins added before Saturday’s opening day.
“Folks will be able to shop a full yard and a full pyramid,” he said.
The Pumpkin Farm at Saltwell will be open 9 a.m. through 6 p.m. Saturday, closed Sundays and open 9-6 Monday through Saturday through October. The Ash family welcomes school groups and clubs to schedule private visits. Morning time slots are nearly full, but some evening visits remain. Message Ash through The Pumpkin Farm at Saltwell Facebook page. Ash also welcomes additional vendors to jump on board.
“If you sell homemade goods, crafts, soap, buttermilk – I don’t care what you make. If you want a place to sell it, message me,” he said.
It is beginning to look a lot like fall and harvest time around the farm.