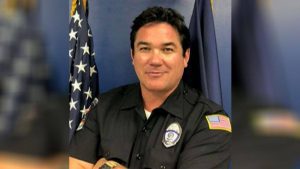 “It was really neat that we were able to use three different law enforcement groups as resources,” said Campbell, referring to Bridgeport Police, Clarksburg Police and the Harrison County Sheriff’s Department, which provided police cruisers, equipment, personnel and plenty of insight for the film.
Working with all the law enforcers and observing their behavior, character and true integrity, really made an impression on Campbell. Although he witnessed plenty of staged police action, he has also in recent months witnessed the law enforcers in real action. 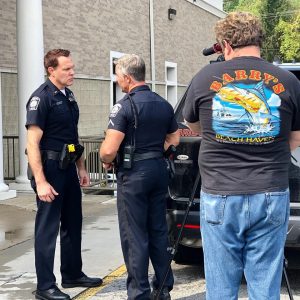 “You think sometimes that in these small towns, these acts of chivalry don’t exist, but they do,” he said. “They regularly engage in acts of selflessness and bravery to keep the community safe.”
Campbell said he aspired to create a good film and he is quite pleased with the outcome.
“It shows how God can really intervene in hearts and lives and change them. It shows that goodness prevails,” he said. “This film is about miracles and hope.”

Based on the book of the same name, “Dispatched” follows the story of Officer Carl Thomas, revered by his police colleagues for his fearlessness in going after the bad guys. But Thomas had a dark side. As the movie plays out, God changes the heart of the street-hardened cop and by working through Thomas, affects an entire community.
Among other locations, filming took place at Brickside Barr & Grille, Bridgeport United Methodist Church (Johnson Avenue), Bridgeport Police Station and Winnie’s.
Cain, who has now starred in a handful of JC Films projects, will be present for the April 19 screening, which is free to attend. There will be opportunity to meet and greet with members of the cast.
Prior to the premiere, Cain will attend a reception for law enforcement and their spouses, just another way to thank them for their service.
In the film, Cain plays the role of Police Chief Patterson with Ford portraying Officer Carl Thomas and Barry Daily playing Officer Jerry Campbell, Thomas’s friend. Sigler portrays the mayor. In total, there are about 35 roles, many played by locals. Several others serve as extras in the movie. Campbell even makes an appearance as the pastor.
“Dispatched” is the 20th film produced by Campbell and JC Films. Others filmed in the immediate area include “Megan’s Christmas Miracle,” “A Promise to Astrid,” “Child of the King” and “The Zombie Club.”
Following the first three films, “The Zombie Club” will soon be launched in national distribution via Amazon Prime. “A Promise to Astrid,” which has reached 12 million views on Amazon, will be available at Walmart, Target and other outlets within the next couple of months.