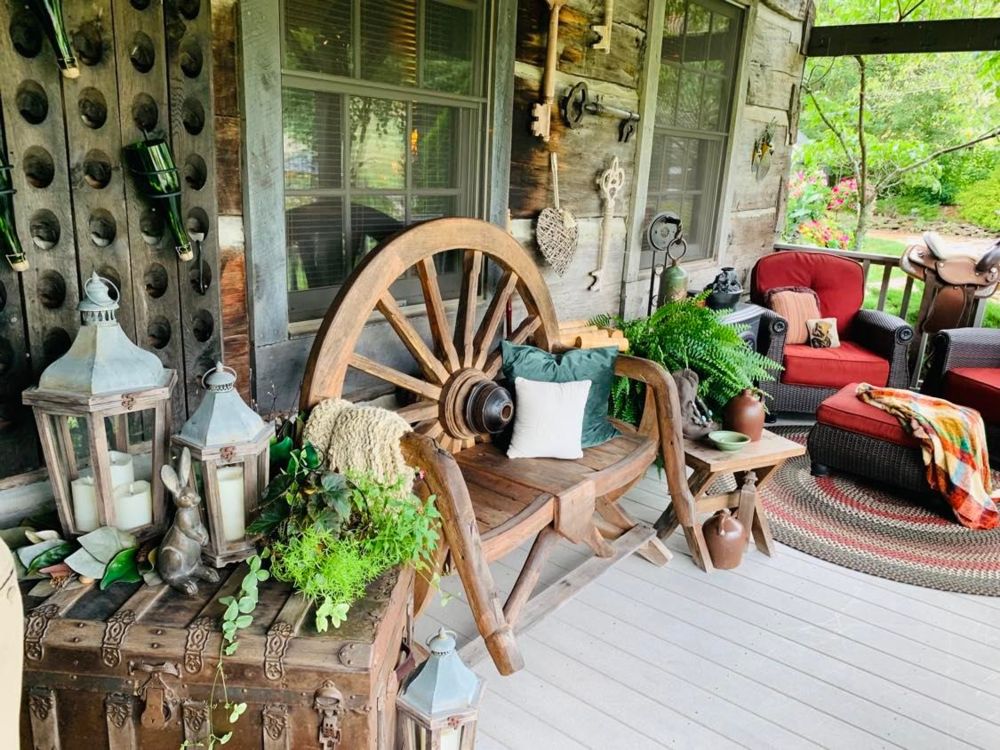 There are items of interest in every corner of Steve and Carla Engle’s cleverly reconstructed mid-19th century log home. A family heirloom dresser has become a vanity, a hidden pocket door leads to a surprise loft, and a Conestoga wagon wheel serves as a bench on their most welcoming front porch. A pair of whiskey barrels have been repurposed into a backyard bar, another as a back porch sink. Not one, but two of Steve’s handcrafted cedar canoes are suspended from ceilings. As Steve tells the story about each accent and each room of the couple’s unique home on Johnstown Road, you can tell his mind is in motion for the next project. 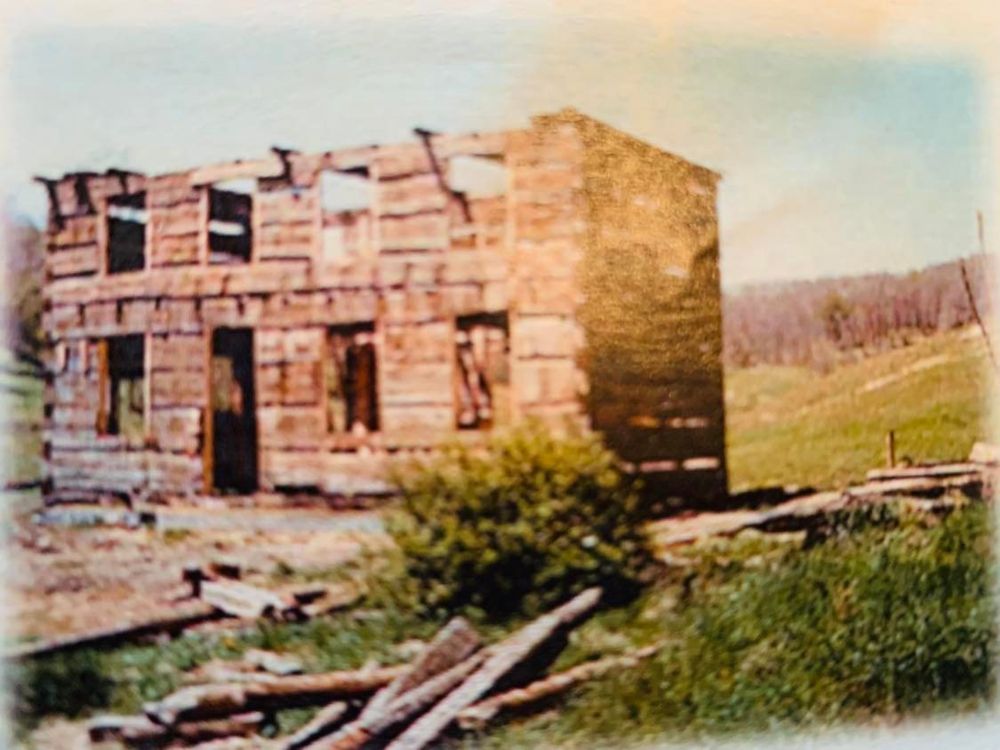 The entire homestead – which includes the original log cabin, a guest cottage, barn/workshop, greenhouse, waterfall, pond, and countless relaxing nooks and play places, all started when Steve – who always had a fascination with log houses – discovered this abandoned one in the 1980s.
“The process of the Stonewall Lake and Dam project took place in the early ‘80s and they had condemned farms and houses in that area,” he said.
He purchased the land with hopes of restoring the 16×32’ home, then a mere skeleton of what it once had been. He knew nothing about the history of the structure until he happened to mention his project to his congregation at Chapel Hill United Methodist Church in Buckhannon.
“A church member came to me after church and said he worked for the Corps of Engineers and had done background on the Butcher/Bush farm before it flooded during the Stonewall Jackson Lake project,” Steve said. “He had interviewed the last living relative, who had since passed away.” 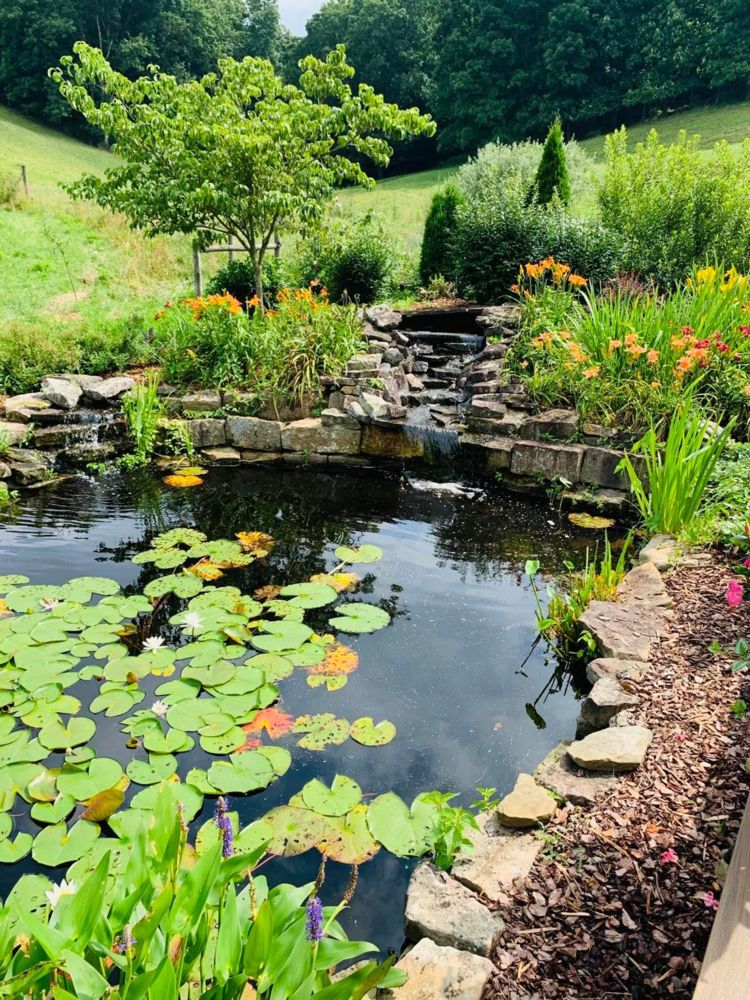 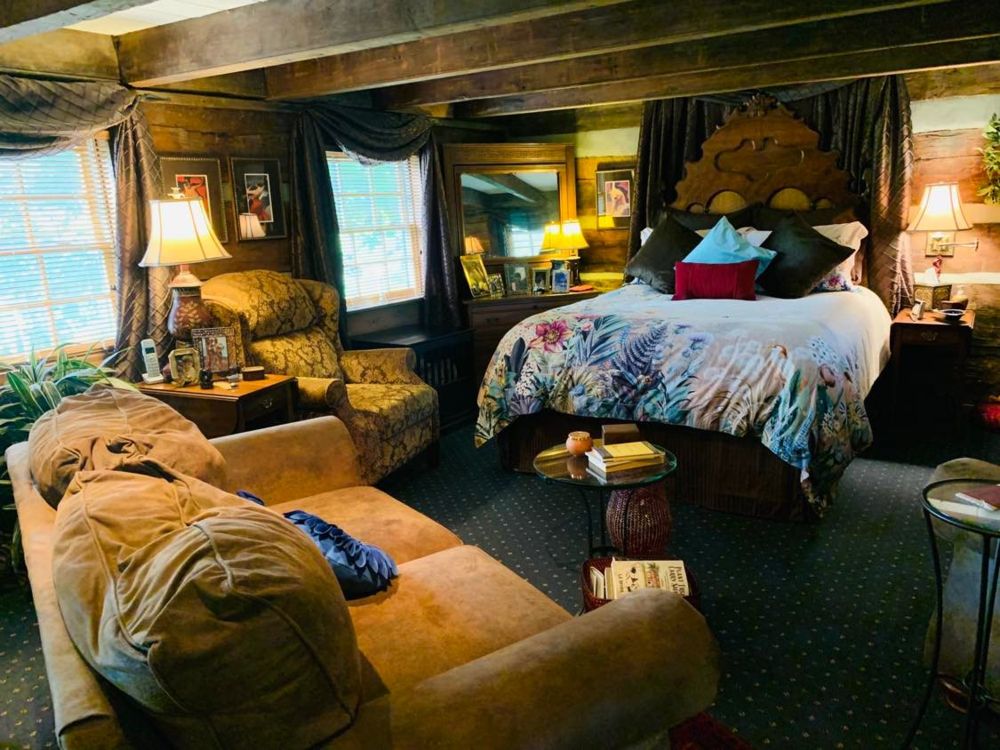 As it turned out, the cabin – located in Little Skin Creek – was built by Isaac Butcher and his wife Christiana.
“They skidded the first story logs in the spring snow of 1846, when it was still the Commonwealth of Virginia,” Steve said. “They built the first story, then as the family began to grow, they took the roof off and added a second story. Then reared 10 children in the house.”
By 1989 – working three years in his spare time – Engle, who was a contractor by trade, had the structure under roof, once again. It was meant to be a cabin, a home away from home. But he and Carla and their blended family of four boys fell in love with it and it became their family home. 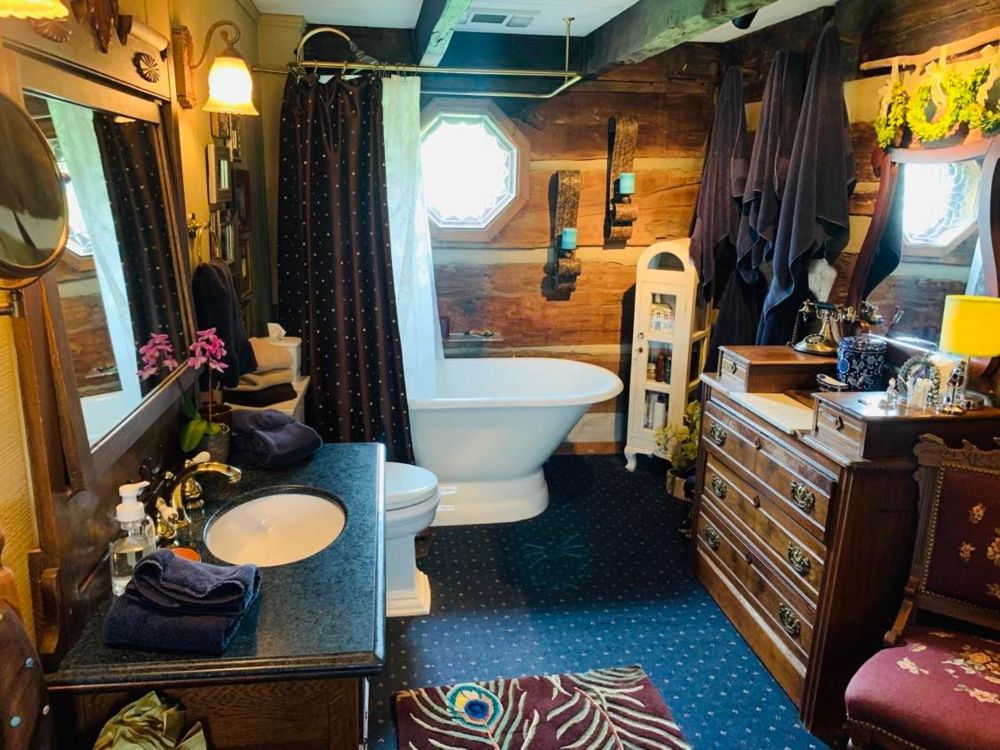 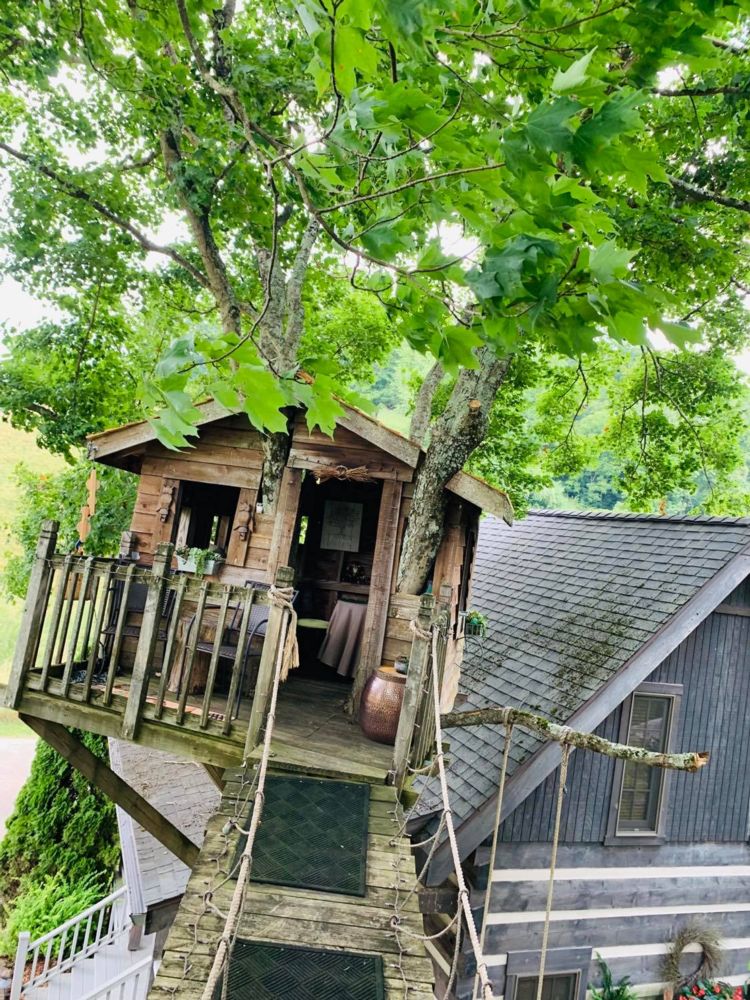 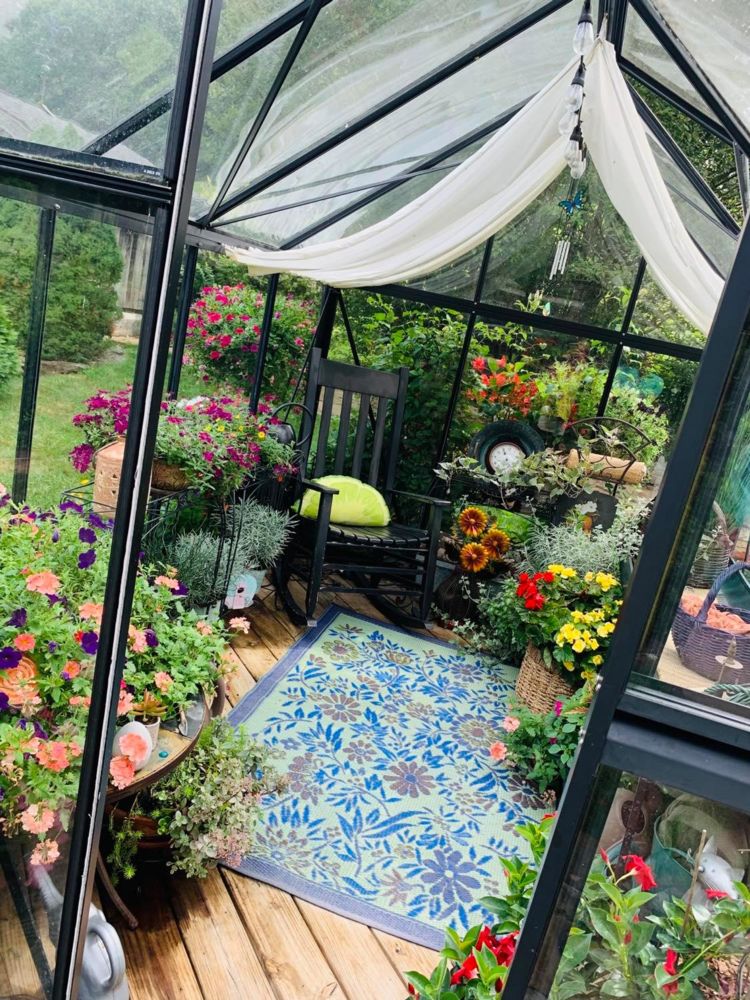 “I feel the place is very eclectic,” Carla said. “We use things we like or find on trips – old mixed with new.”
Their living quarters are reflective of the Engles’ passions. The barn/workshop houses Steve’s woodwork station where he turns bowls from tree burl wood.  A greenhouse features summertime flowers, but it is used in the off seasons for various purposes, like tea parties, fancy holiday dinners, and a heated retreat from wintertime play.
Colorful perennials and a pond plentiful with lily pads and waterfalls bring the compound together. It’s been a story in the making and the “rustic functional” home has been an interesting place to raise their family.
“It’s been a very unique place to raise our sons and now enjoy our grandchildren. When the granddaughters arrive, we really never know where they are going to head first. They dearly love to explore,” Carla said. “The rural setting has allowed us to be in touch with nature every day, watch the cattle farmers around us build their livelihoods around the cattle business, freedom to play without security issues and be in a ‘peace-filled” environment daily,” she said.
The Engles have enjoyed the country home for 25 years and have been generous in sharing their serene setting. In recent years, they have hosted five weddings, utilizing the grounds to accommodate the brides’ dreams. In late-June and early-July, they opened their home for four consecutive days, welcoming the public for tours and refreshments to mark the cabin’s 175th anniversary. A memorable anniversary, it was. Just days before, the property was flooded, resulting in some heavy excavation work and cleanup. But with much hard work and determination, it was completed in time and about 400 people toured the home during the open house week.
The Engles’ blended family includes Richard Gillespie and wife Natalia of Washington, DC, Steven Gillespie, wife Holly and daughters Phebe and Virginia of White Sulphur Springs, Chad Engle and wife Megan of Austin, Texas and Russell Gillespie of Huntsville, Ala. 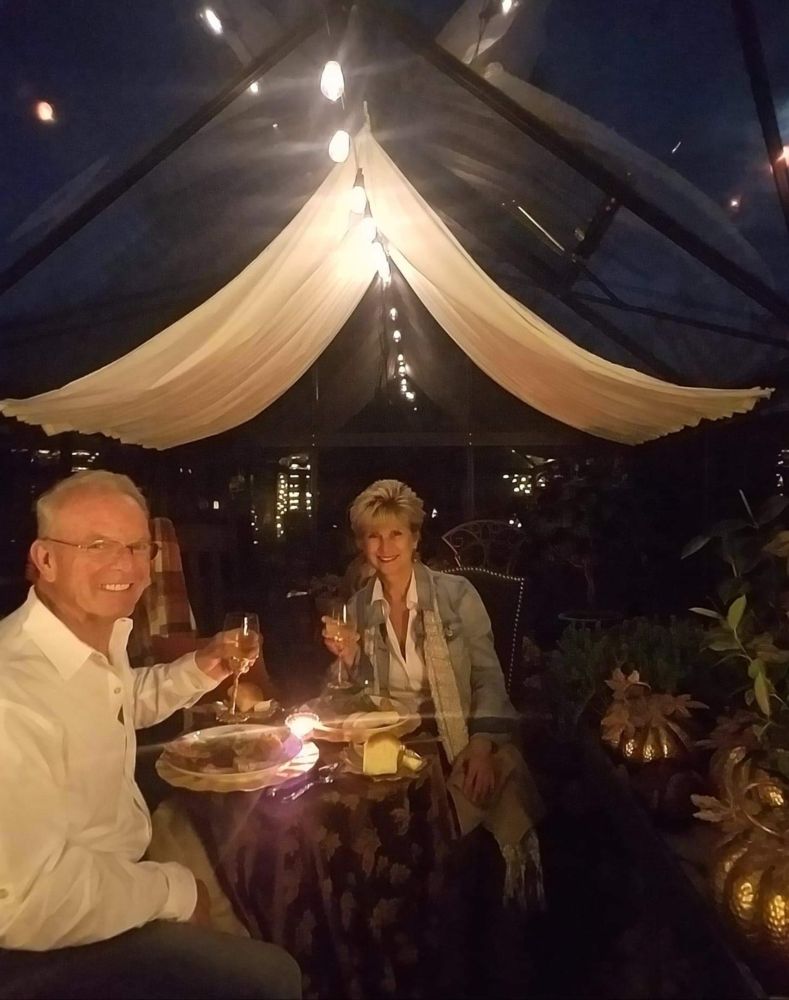